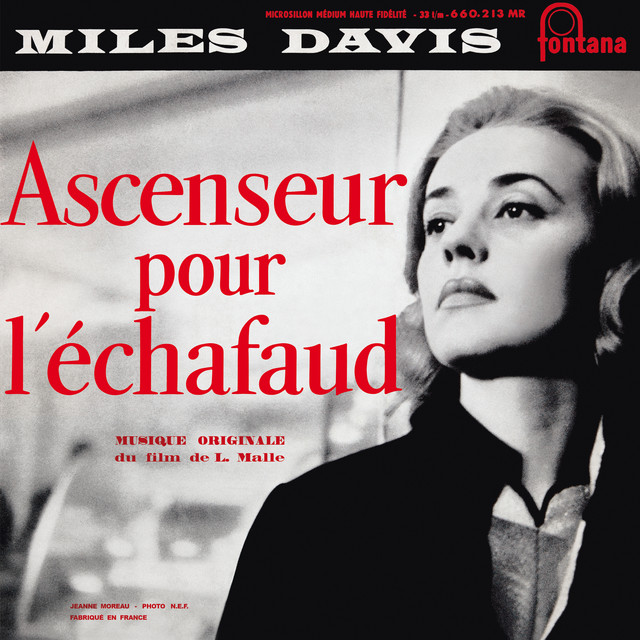 It’s no slight to French filmmaker Louis Malle that his first feature movie, the film-noir caper L’Ascenseur pour echafaud (titled Elevator To The Gallows in the U.S.) is today as famous for its soundtrack as it is the film itself. Malle himself called the moody soundtrack “un cadeau”—a gift—and indeed, the music Miles spontaneously recorded with a primarily French jazz group is today revered as one of the best examples of modern jazz serving as a cinematic score. That the effort was done in such an impromptu fashion—after one screening of the film, during an overnight recording session in a Paris radio station with musicians who were not his regular band—makes it even worthier of admiration. Music does indeed travel with the musician.

Then there’s the sound of the soundtrack itself: melancholy and mysterious to an extreme, filled with moods and mood-swings, like that moment in “Générique” when the tonality shifts from minor to major. It lasts but for a few seconds—at 1:11 into the tune—before the clouds roll back.

“Générique” is one of the more pronounced, modal exercises on the soundtrack, a prefigure to “So What” in a way; “Florence sur les Champs-Elysées” is its more upbeat cousin. Other Ascenseur tracks are similarly reductive in their use of harmony, and rely on other details: the repeated, pained two-note phrase in “Julien dans l’ascenseur,” played through open trumpet, and then with the Harmon mute. The ominous, tick-tock bass pattern of “L’Assassinat de Carala” that repeatedly hits, as the trumpet attempts to pull the tune somewhere, anywhere else. “Au Bar du Petit Bac” is a welcome change of pace to the overall mood as Miles’ trumpet and Barney Wilen’s saxophone chase each other to a toe-tapping groove. The up-tempo “Sur l’autoroute” and “Dîner au motel” both bristle with bebop’s signature restlessness: Miles plays 16th-note runs and yet it remains harmonically static, going nowhere, like the lovers running in vain after the young street tough who murders the older German. 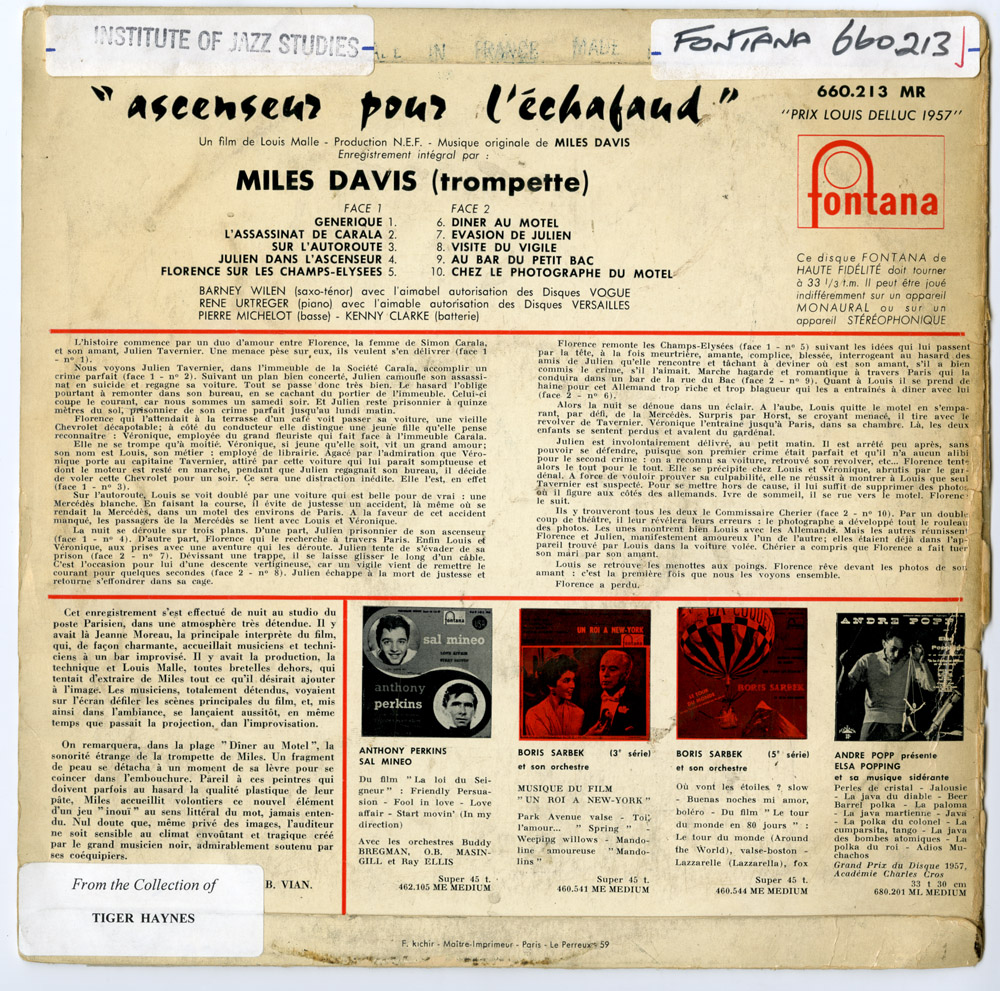 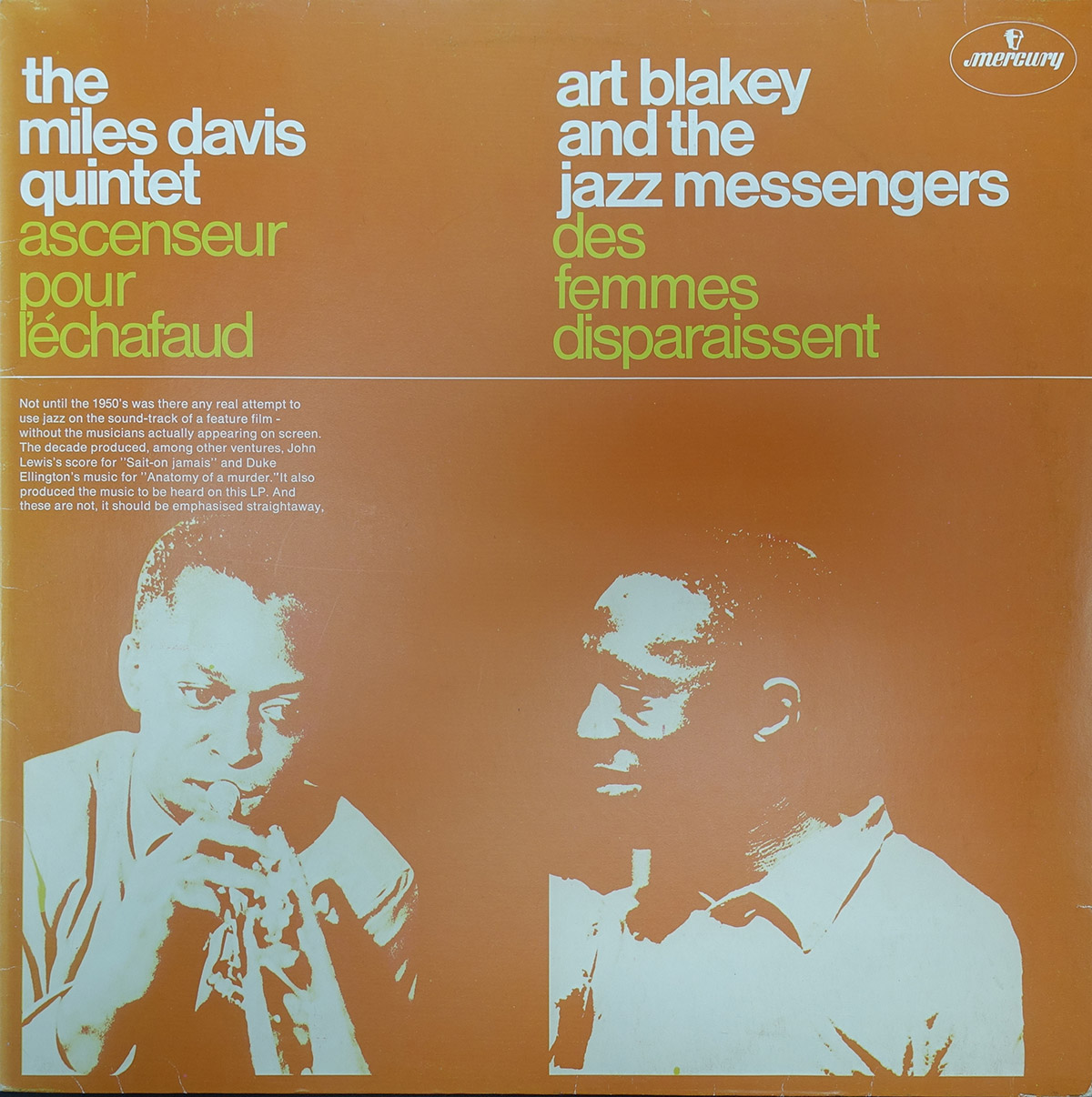 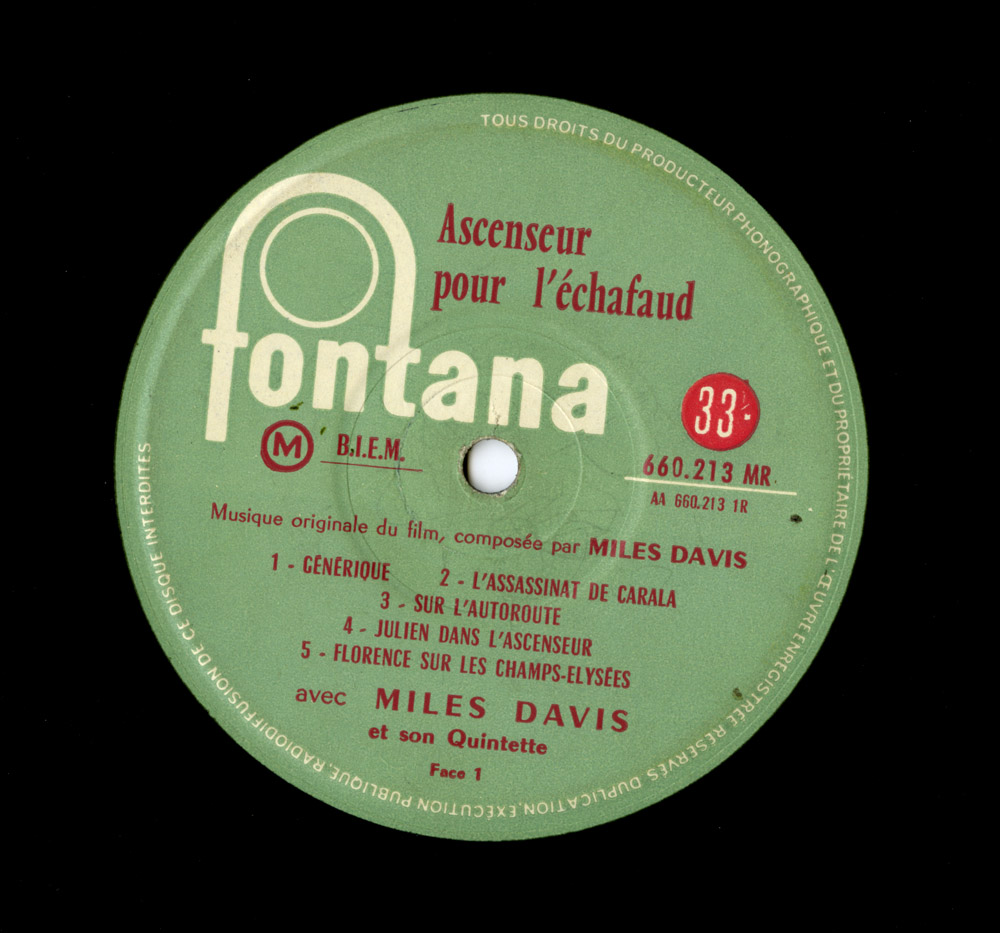 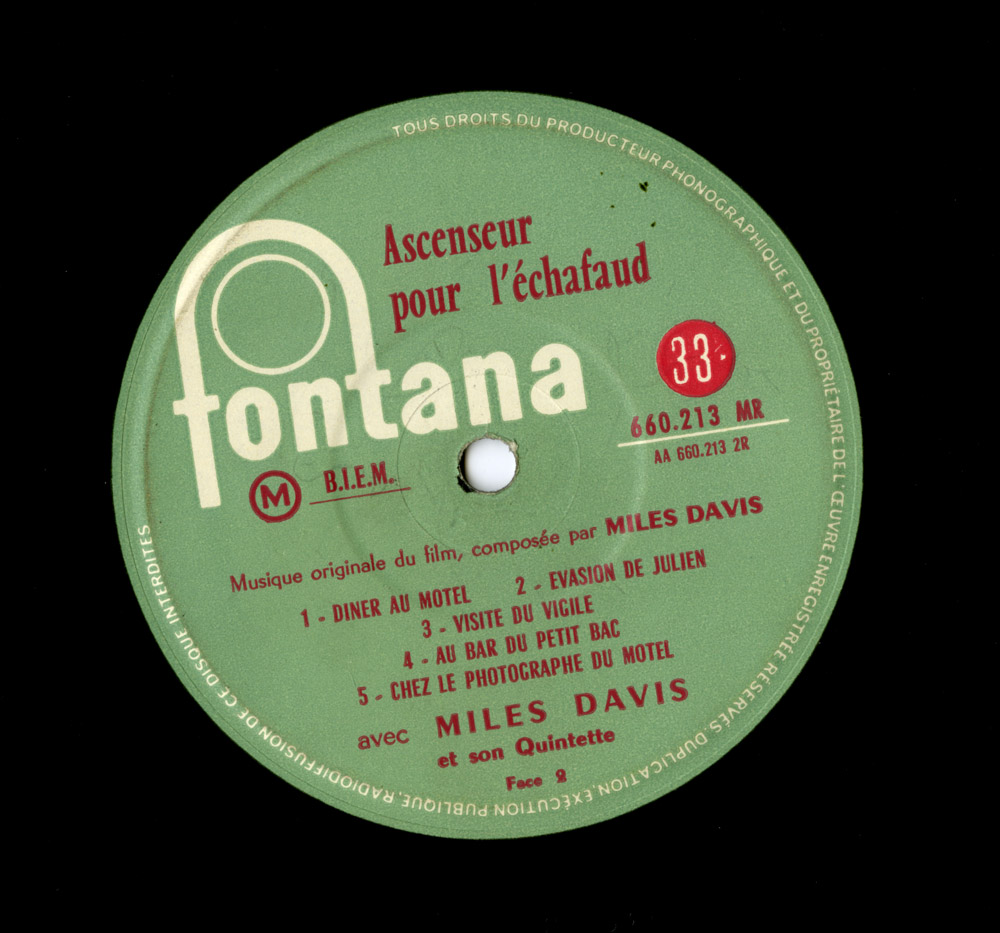 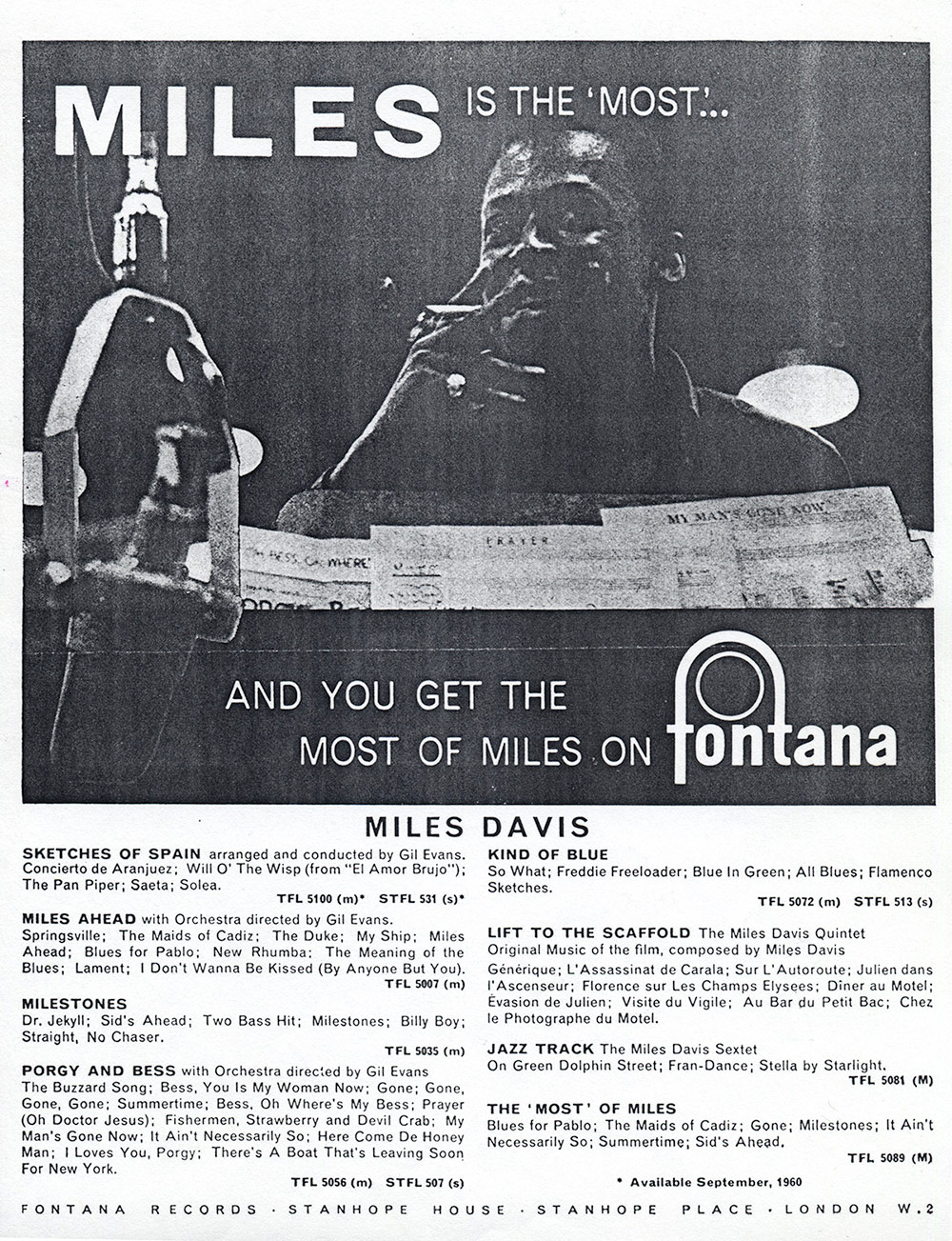 As Miles offered something rare and special in his music for the film, so Malle bestowed a gift in return: the opportunity for Miles to experiment on a new musical approach that had been brewing inside him: the approach that would come to be known as “modal jazz” and shape future albums like Porgy and Bess and of course, Kind of Blue. The L’Ascenseur soundtrack serves as the sketchbook that led to those later masterpieces.