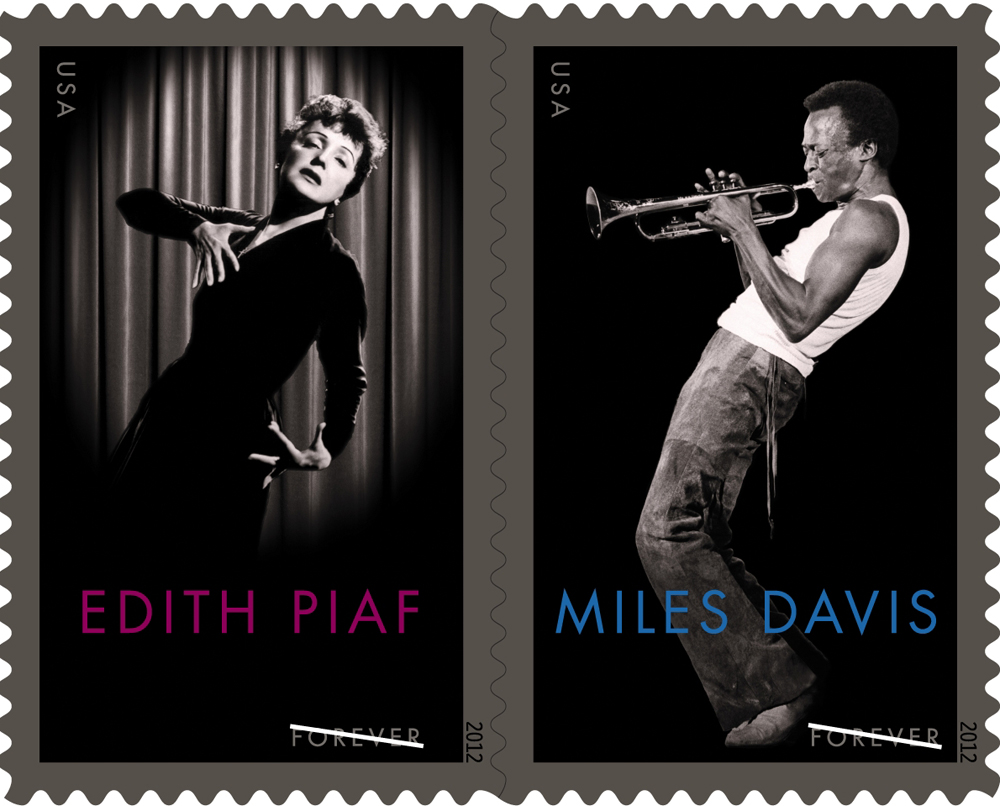 “On behalf of the Miles Davis family, we are honored that the U.S. Postal Service and La Poste are paying homage to the timeless legacy of Sir Miles Dewey Davis,” says Cheryl Davis (daughter of Miles), Erin Davis (son of Miles) and Vince Wilburn, Jr., (nephew of Miles), representatives of Miles Davis Properties, LLC.

Miles Davis was in the forefront of jazz musicians for decades, setting trends and exploring musical styles from bebop through cool jazz, fusion and funk. His restless musical exploration made him a hero to many, while sometimes confounding critics and fans. Among his many influential recordings are Birth of the Cool, Kind Of Blue, Sketches Of Spain and In A Silent Way. He was also a great bandleader, and many important musicians rose to prominence in his bands, including saxophonists John Coltrane and Wayne Shorter, drummers Tony Williams and Jack DeJohnette, and pianist Bill Evans, Chick Corea, and Herbie Hancock.

Davis’ music will long be remembered for its profound depth of feeling. By the time of his death in 1991, he had won many prizes and honors, including a GRAMMY Award for Lifetime Achievement. In 1984, he received Denmark’s prestigious Leonie Sonning Music Prize. In 1989, he was awarded the Grande Medaille de Vermeil by the city of Paris, which was presented to him by Jacques Chirac, then mayor and later president of France.

The most recent Miles Davis release entitled The Miles Davis Quintet – Live In Europe 1967: The Bootleg Series Vol.1, continues to rake in accolades. The critically acclaimed volume tops many critics’ year-end picks, and it also landed in first place in both the Jazz Times Critics Poll and the Readers Poll. Slate calls it one of the Best 10 Jazz Albums of the year. The Bitches Brew Deluxe Edition is also earning accolades with a recent win for “Best Historical Package” in the DownBeat Reader’s Poll. On June 27, the LA Philharmonic presents A Miles Davis Celebration at the Hollywood Bowl featuring Marcus Miller “Tutu Revisited,” Miles Electric Band and Kind Of Blue: Jimmy Cobb’s “So What” band.

Americans may know Edith Piaf best for her cheerful song “La Vie en Rose” (“Life In Pink”), about the experience of falling in love and seeing life through rose-colored glasses; the tune is still heard on the streets of Paris today. Piaf’s tumultuous life got off to a stormy start.

Customers may view the Miles Davis and Edith Piaf Forever stamps, as well as many of this year’s other stamps on Facebook at facebook.com/USPSStamps, through Twitter @USPSstamps or on the website Beyond the Perf at beyondtheperf.com/2012-preview. Beyond the Perf is the Postal Service’s online site for background on upcoming stamp subjects, first-day-of-issue events and other philatelic news.

The Postal Service receives no tax dollars for operating expenses and relies on the sale of postage, products and services to fund its operations.