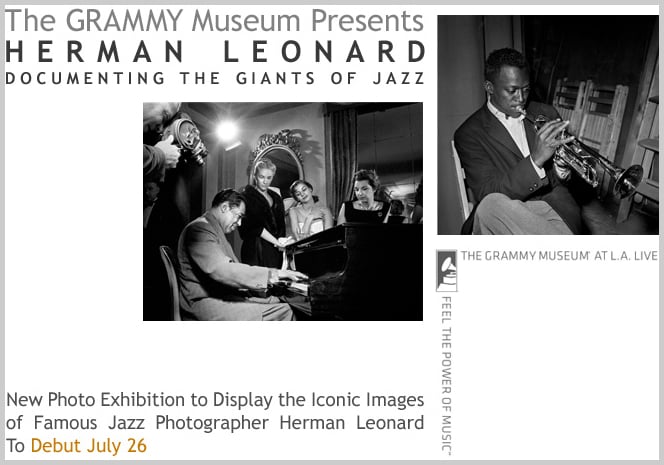 “Herman Leonard had that rare ability to connect with his subjects, and capture a side of musicians that many had never been seen before,” said GRAMMY Museum Executive Director Bob Santelli. Leonard’s stunning photographs have been showcased worldwide and his body of work is a historical treasure. We are honored to be displaying such works at the GRAMMY Museum.”

Born and raised in Allentown, PA in 1923, at age 9, Herman Leonard witnessed an image being developed in his brother’s darkroom and became enthralled with the magic of photography. In 1948, Herman’s passion for jazz brought him to New York City’s Greenwich Village, where he established a studio and captured the swinging clubs of Broadway, 52nd Street and Harlem. With the camera as his free ticket, he photographed and developed friendships with some of the greats of jazz history including Charlie Parker, Dizzy Gillespie, Billie Holiday, Duke Ellington and several others.

In August 2005, Hurricane Katrina destroyed Herman’s home and studio in New Orleans, where he was living at the time. The storm claimed some 8,000 photographs that had been hand printed by Herman, a master printer in his own right. As the storm blew in, Herman’s crew gathered the negatives and placed them in the care of the Ogden Museum of Southern Art where they were stored in an upper floor vault. Following Hurricane Katrina, Herman moved to Studio City, California, and re-established his life and business there.

Herman’s jazz photographs, now collector’s items, are a unique record of the jazz scene of the 1940s, 1950s and 1960s. The Smithsonian claims 130 original Herman Leonard photographic prints in its permanent collection, where they are considered as essential to American music history. Having passed away at the age of 87 on August 14, 2010, he is remembered by President Clinton as, “The greatest jazz photographer in history.”

Featuring more than 30 of Leonard’s portraits from performances, rehearsals, recording sessions and backstage gatherings, Herman Leonard: Documenting the Giants of Jazz features photos ranging from the years 1948 – 2000. Providing a glimpse into the world of jazz, bebop and even Leonard himself, the exhibit will feature both rare and iconic shots of musicians from including Duke Ellington, Etta James, Billie Holliday, Miles Davis, Quincy Jones, Trombone Shorty and many, many more. The exhibit will be on display through February, 2013.

The Herman Leonard Jazz Archive was established in 2007 and in 2008 was awarded a GRAMMY Foundation Grant for Archiving and Preservation. This project was successful in digitally archiving Leonard’s catalog of over 35,000 negatives, comprising a visual documentation of America’s original art form, preserving it for future generations.

“The Leonard estate is extremely grateful for the support of the GRAMMY Foundation after the devastating losses in New Orleans following Hurricane Katrina, said Shana Leonard, daughter of Herman Leonard. “Herman would have been overjoyed and honored by this exhibition at the GRAMMY Museum.”

Museum admission is $12.95 for adults; $11.95 for senior citizens (65+); and $10.95 for students with I.D. (ages 6 – 22) and members of the military. GRAMMY Museum members and children 5 and under are admitted free. Located at 800 West Olympic Boulevard, Suite A245, Los Angeles, CA 90015, with an entrance off of Figueroa Street, the Museum resides within the L.A. LIVE campus, at the intersection of Olympic Boulevard and Figueroa Street in downtown Los Angeles. For more information, please call 213.765.6800 or visit www.grammymuseum.org. For exclusive content, join the organization’s social networks as a Twitter follower, and on Facebook.

About The GRAMMY Museum
Paying tribute to music’s rich cultural history, this one-of-a-kind, 21st-century Museum explores and celebrates the enduring legacies of all forms of music, the creative process, the art and technology of the recording process, and the history of the premier recognition of excellence in recorded music — the GRAMMY Award. The GRAMMY Museum features 30,000 square feet of interactive and multimedia exhibits located within L.A. LIVE, the downtown Los Angeles sports, entertainment and residential district. Through thought-provoking and dynamic public and educational programs and exhibits, guests can experience music from a never-before-seen insider perspective that only The GRAMMY Museum can deliver.