Skip to content
THE GENIUS OF MILES DAVIS: A Must for Miles Davis Aficionados 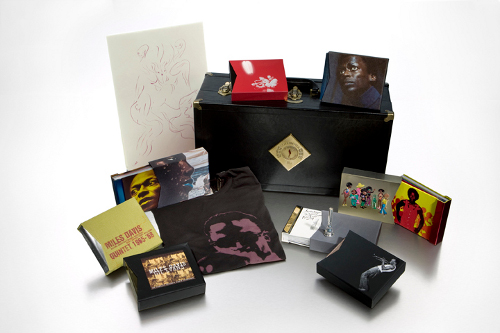 The consummate artistry of Miles Davis and the scope of his musical vision at Columbia Records is paid the ultimate tribute on THE GENIUS OF MILES DAVIS. For the first time, this new collection brings together the eight deluxe multi-CD box sets that were known as The Miles Davis Series. Each volume – seven of which have collectible “metal spines” – explored a major phase of the artist’s development from 1955 (Miles Davis & John Coltrane: The Complete Columbia Recordings 1955-1961) through 1975 (The Complete On The Corner Sessions). Each volume presented the music from various LPs, plus a wealth of previously unissued session material. The eight box sets, totaling 43 CDs of music, were originally released on Columbia/Legacy between 1996 and 2007, and won a total of eight Grammy Awards.

Several of the original box sets have sold out over the years, and have now been re-manufactured especially for this strictly limited-edition run of 2,000 copies of THE GENIUS OF MILES DAVIS. Presented in a replica of Miles’ own trumpet case, a collectible objet d’art in and of itself, each package will include a number of extras: an exact replica of Miles’ custom-made ‘Gustat’ Heim model 2 trumpet mouthpiece, a previously unseen and unavailable fine art lithograph by Miles, and a boutique quality t-shirt designed and manufactured exclusively by Trunk Ltd. for this package.

Weighing in at 21 pounds and individually numbered, THE GENIUS OF MILES DAVIS is destined to be a treasure in the hands of true Miles Davis aficionados. A Direct to Consumer exclusive, it is now available for pre-order at $749.00 in advance of its October 26th release.

THE GENIUS OF MILES DAVIS includes the eight studio session box sets that encompass the bulk of his original studio albums from the ’50s to the ’70s. It does not include the various Columbia/Legacy live performance multi-CD box sets, for example The Complete Live at the Plugged Nickel 1965, released in 1995; or The Cellar Door Sessions 1970, released in 2005.

The signing of Miles Davis to Columbia Records made musical history in 1955. He continued to make musical history for decades to come, changing the course of jazz (and in the process, popular and avant garde music) “four or five times,” as he himself once quipped. There were important albums under his name in the late-1940s and ’50s before his arrival at Columbia, and there were also notable albums after his years at Columbia, from 1986 until his death in 1991.

But Columbia Records became the repository of the overwhelming majority of the signature albums recorded by Miles in his lifetime, many of them with long-time producer and collaborator Teo Macero. These individual albums were gathered together in their entirety for the first time last year as The Complete Miles Davis Columbia Album Collection. A functional chest with removable lid housed the 52 single and double album titles (70 CDs of music in total), each packaged in a mini-LP CD cardboard replica of the original jacket, with original artwork and spine.

THE GENIUS OF MILES DAVIS is also the result of a unique collaborative partnership effort between the Miles Davis Estate and Sony Music, which includes the redesign of the MilesDavis.com website. It is now the first unified and regularly updated site high­lighting all aspects of his life. The dynamic web environment is not specific to Columbia/Legacy and Sony Music, in that it will cover product releases by other companies as well. The website, featuring news and vital information, video content, merchandise, and exclusive photography, will also offer special daily and weekly deals.

THE GENIUS OF MILES DAVIS draws together more than a decade of studio archival research by jazz scholars, annotators, and reissue producers. Each of the box sets in The Miles Davis Series was anxiously greeted with raves by the critical establishment upon their release, and more than half of the box sets received at least one Grammy Award, some winning multiple Grammys. They are summarized as follows (in chronological order of the original music, not the Columbia/Legacy release dates):