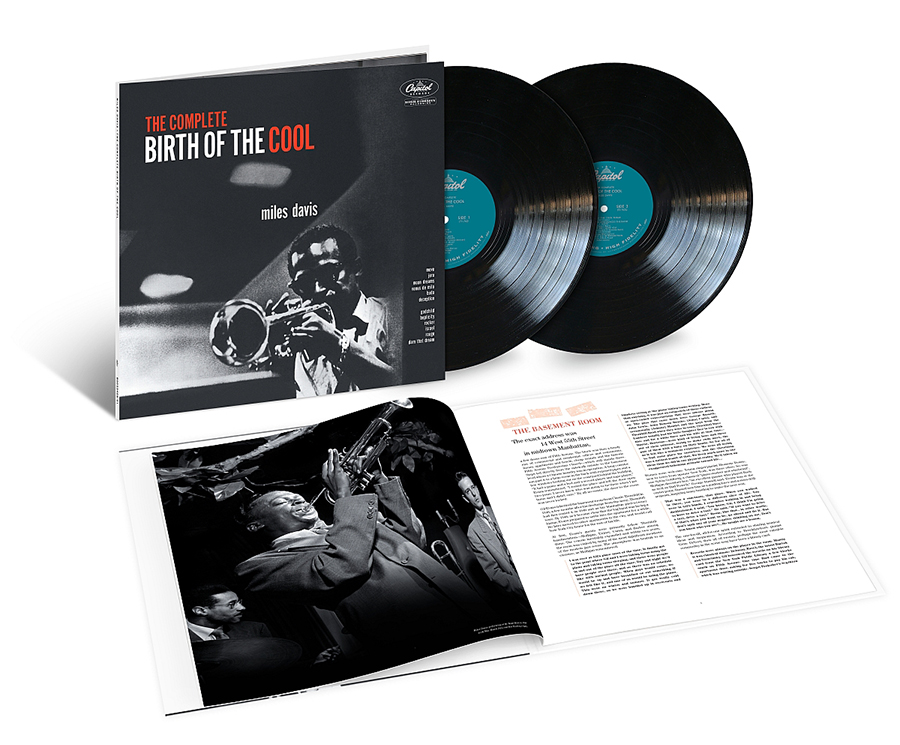 Seventy years ago, in a nondescript basement room behind a Chinese laundry in midtown Manhattan, a group of like-minded jazz modernists formed a groundbreaking collective. Among them were jazz headliners soon-to-be: Gerry Mulligan, Lee Konitz, Max Roach, John Lewis, the arranger Gil Evans and significantly, the 22-year-old trumpeter Miles Davis, who became the leader of the project. The music this historic nine-piece group created together in 1949 and 1950 — in the studio and onstage — came and went with little notice at first. Seven years later, when the music was collected on a full LP for the first time, the world came to understand its impact: a true watershed moment in postwar music, dubbed with the name that remains one of the best known in modern jazz: Birth of the Cool.

To be released May 17 by Blue Note/UMe, The Complete Birth of the Cool chronicles the brief yet monumental importance of the Miles Davis Nonet. Honoring the 70th anniversary of the initial Birth of the Cool sessions, The Complete Birth of the Cool presents together all the music created by this collective. Available now for pre-order in 2LP vinyl and digital formats, the collection includes the twelve sides they recorded in 1949/‘50, as well as the ensemble’s only extant live recordings, recorded at the Royal Roost. The new release marks the first time since 1957 that the recordings have been remastered for vinyl and the first time all the Birth of the Cool performances — studio and live – are available together on LP. The 2LP vinyl package includes a booklet filled with archival photographs and an extensive new essay by GRAMMY®-winning American music historian Ashley Kahn.

Pre-order Miles Davis’ The Complete Birth of the Cool: https://lnk.to/BirthOfTheCool

The Complete Birth of the Cool stands as an important reminder of the enduring stature of trumpeter Miles Davis, whose career famously shifted from one phase to the next, serving a Pied Piper role each time his intrepid musical spirit brought on a change. In 1949, Davis was a determined 22-year-old — Birth of the Cool saw him helm a creative project for the first time, his name in the titular spot, assuming bandleader duties: calling rehearsals, booking gigs. In one sense, the music turned him away from the small-band, unfettered energy of bebop — the style founded by Charlie “Bird” Parker and Dizzy Gillespie which first drew him to New York City. In another, Birth of the Cool was Davis’ (and the group’s) determined attempt to mutate the language of bebop, mixing with a wider palette of sounds and sophistication.

The seeds of Birth of the Cool were planted in the Manhattan basement apartment of the arranger/composer Gil Evans, who hosted informal musical meetings in which ideas about arranging, jazz, and classical music were shared and explored among a younger generation of musicians. The meeting of Evans and Davis in this humble location led not only to the triumph of Birth of the Cool, but predicted future collaborations, as well, for albums that are regarded as cornerstones of modern jazz — Miles Ahead, Porgy & Bess, and Sketches of Spain.

The cross-racial and intergenerational friendship of Miles Davis and Gil Evans is one of the stories told in Kahn’s The Complete Birth of the Cool liner notes essay, as well as the big band leader/pianist Claude Thornhill and his role as a source-point to Birth of the Cool. Also explored is the perceptive support of Capitol Records producer Pete Rugolo, who recorded the group initially, and who in 1957 oversaw the album’s reissue and was credited for coming up with the title Birth of the Cool. The importance of Davis’ fellow soloist, alto saxophonist Lee Konitz is also covered in the essay, with new comments from the jazz legend.

The Complete Birth of the Cool is an invitation to understand the music within the context it was born. To the ears of music fans in 1949, the sound of Birth of the Cool was as entrancing as it was strange: intricate in its big band arrangements, but with solos and rhythm section breathing the fire of bebop. There’s the flavor of modern classical music on some ensemble passages, and at times musical devices — like counterpoint — one would not expect to hear in popular music of the day. There are instruments then-familiar and unfamiliar (French horn, tuba) to the jazz world. The melodies are fresh and hummable, but with unusual titles like “Move” and “Godchild,” “Deception” and “Venus De Milo,” “Jeru” and “Rocker.”

Birth of the Cool was music that focused on arrangements — the Miles Davis Nonet began as an arranger’s band. Even though different composers and arrangers created the music (Gil Evans, Gerry Mulligan, John Lewis, John Carisi), Birth of the Cool has a remarkably consistent sound. It’s about a collective, not an individual.

Seventy years later, why is this music still so relevant and revered? As Kahn writes in his essay, the Birth of the Cool story is about bold beginnings and debuts…

“Birth of the Cool was a proving ground of instrumental talent and of approaches. Each of its participants would develop ideas that came from the project in their own disparate way, collectively leading jazz into a brave, postbop world in the years that followed.”

In fact, as jazz historian Dan Morgenstern writes, “There can be little doubt that these records triggered the advent of a successor style to bebop.” That’s a lot of historical responsibility for a mere dozen studio tracks and a few club gigs to carry, yet that has become the majority opinion, further evidenced by The Complete Birth of the Cool. The proof is in what followed those sessions: through the 1950s, the advent of “cool” jazz with its subdued feeling and understated energy, and the continuing romance between jazz and classical music (the so-called “Third Stream Music” of Gunther Schuller and others), all traced their beginnings to the Birth of the Cool sessions.

Yet, as one record producer asserted, Birth of the Cool was the sound of arguably the most important voice in modern jazz reaching its first stage of maturity. “Here was a chance for all his sensitivity, compared to Bird’s savageness and deep fire and emotion,” said Bob Weinstock, founder of Prestige Records. “Here was an outlet for Miles Davis to let out the sensitivity that he had as a musician.”

Asked about the Birth of the Cool title, Miles Davis once said: “I think what they really meant was a soft sound. Not penetrating too much. To play soft you have to relax…” He later added in his autobiography, “Birth [of the Cool] was not only hummable but it had white people playing the music and serving in prominent roles…we shook people’s ears a little softer than Bird or Diz did, took the music more mainstream.”

LP ONE: The Studio Sessions

1. Birth of the Cool Theme