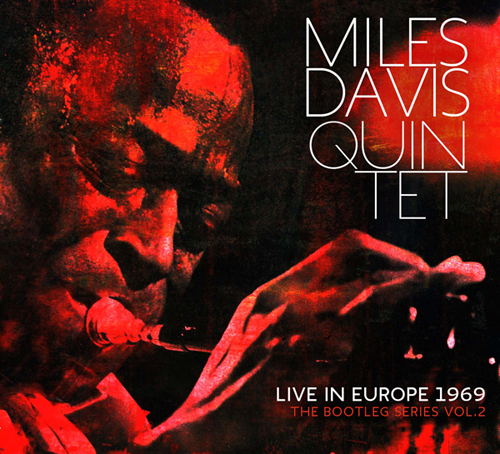 Second volume of the best-reviewed historic box set of 2011 coming in January 2013!

Live In Europe 1967 (released September 2011), the debut entry in the Miles Davis Bootleg Series, was by far the most acclaimed historic jazz box set of 2011. It received a “5-star” review from Down Beat magazine, and was voted Historical Album of the Year in the Down Beat Readers and Critics Poll.

Live In Europe 1967 was ranked the #1 reissue in both the Critics and Readers polls of JazzTimes magazine, and the Jazz Journalists Association voted it Best Historical or Boxed Set. The package received an “A” from Entertainment Weekly, and Pitchfork.com said “At its heart, jazz thrives on bold, sensitive interaction in the moment, and Live In Europe 1967 represents the pinnacle of that practice.” Rave reviews appeared in a wide array of publications including The New York Times, Los Angeles Times, The Nation, Slate, and many others.

In his Sunday “Arts & Leisure” rave review of Live In Europe 1967, New York Times critic Nate Chinen concluded: “It’s humbling to think that a release like Live in Europe 1967 might help illuminate jazz’s present as well as its past, but that’s what great archival work can do. So congratulations, Columbia/Legacy. Now, what’s next?” The answer to his question is: LIVE IN EUROPE 1969.

“After we finished In a Silent Way,” Miles told his biographer Quincy Troupe (in the definitive Miles The Autobiography, Simon & Schuster, 1990), “I took the band out on the road; Wayne, Dave, Chick, and Jack DeJohnette were now my working band. Man, I wish this band had been recorded live because it was really a bad motherfucker. I think Chick Corea and a few other people recorded some of our performances live, but Columbia missed out on the whole fucking thing.”

LIVE IN EUROPE 1969 lives up to the Miles Davis Bootleg Series mission of presenting live performances that are previously unreleased, have previously only been bootlegged, or are very rare. The new box represents the first major collection to be devoted exclusively to the short-lived ‘third great quintet,’ sometimes referred to as Miles’ ‘lost band’ of 1969-70: Shorter on soprano and tenor saxophones, Corea on electric piano (and occasionally acoustic piano), Holland on acoustic bass, and DeJohnette on drums.

The Miles-Shorter-Corea-Holland-DeJohnette lineup (in tandem with other players) began to solidify during the 1968-‘69 recording dates that became the Filles De Kilimanjaro and In a Silent Way albums. And they were at the core of the dozen or so musicians joined together by Miles in August 1969, for the principal sessions that became the landmark turning point of his Grammy Award®-winning Bitches Brew.

But the ‘third great quintet’ by itself was never documented in the recording studio. Their European tours of 1969, represented on this new package, are some of the only existing recordings of the group, and the first legitimately released audio recordings by this stellar lineup. Underscoring their official debut here, over 43 years later, is a superbly shot multi-camera color DVD of the band at its hottest in Berlin in November, 1969. Miles is seen in the best of health in 1969, eating a macrobiotic diet (along with the other band members), and avoiding drugs. As a result, his playing was never stronger than on these 1969 concerts, with his chops at an absolute peak.

LIVE IN EUROPE 1969 captures the short-lived quintet in three separate concert settings, starting with two full-length (one hour-plus) sets at the Antibes Jazz Festival in France on CD One (July 25th) and CD Two (July 26th). The locale moves to Stockholm on November 5 for the program heard on CD Three. In Stockholm, the quintet performed as part of “The Newport Jazz Festival In Europe” and they are introduced (on the CD) by the festival’s producer and founder, George Wein.

The DVD is the complete 46-minute color performance of the quintet at the Berlin Philharmonie on November 7, 1969. As with Live In Europe 1967, the paradox of LIVE IN EUROPE 1969 is the fact that the concerts were recorded by state-owned radio and television outlets – a case of European bureaucracies (thankfully) preserving our American jazz heritage. This has also enabled Legacy to have access to the best-sounding original masters in each case.

The audio and video sources of LIVE IN EUROPE 1969 have been remastered from the best available masters, which Legacy has secured from the European broadcast centers who originally documented the material. As with all of Legacy’s Miles Davis historic projects over the past two decades, the remastering has been done by multi-Grammy Award®-winning Sony engineer Mark Wilder. The audio and video is far superior to any previous circulating [bootleg] versions of this material.

In the tradition of Legacy’s historic releases, LIVE IN EUROPE 1969 will include a booklet with comprehensive liner notes. The box also includes full discographical data, as well as rare or uncirculated photography and memorabilia.

For this package, an expansive 3,000-word essay (“Field Recordings from a Future-Leaning Past”) has been written by noted journalist Josef Woodard, winner of the ASCAP Deems Taylor Award for jazz writing in 1998, best known for his jazz writing in the Los Angeles Times. The essay features quotes from an interview with Miles in 1989, and interviews at various times (up through 2012) with all of the surviving members of the band. Shorter, Corea, Holland, and DeJohnette, whose contributions to Miles’ bands are legendary, are among the most prominent and acclaimed living jazz artists, still recording classic music and touring all over the world.

The tracklisting for LIVE IN EUROPE 1969 reveals that the Quintet was playing an inspired, wide-ranging repertoire. Material ran the gamut from 1969’s In a Silent Way (“It’s About That Time”) and Bitches Brew sessions (“Miles Runs the Voodoo Down,” “Sanctuary,” “Spanish Key,” “Bitches Brew”) all the way back in time to standards like “I Fall in Love Too Easily” (from 1963’s Seven Steps To Heaven) and Thelonious Monk’s “’Round Midnight.”

At no other time did Miles perform compositions from his be-bop era (“’Round Midnight”), modal era (the 1958 “Milestones”), ballads and blues of the early ’60s era (“I Fall In Love Too Easily,” “No Blues”), material from the ‘Second Great Quintet’ mid-to-late ’60s era (“Footprints,” “Nefertiti”) and late ’60s-early ’70s electric era (“It’s About That Time,” “Spanish Key”), all in the same set program, as he did at Antibes.

It is crucial to note that the versions of “Miles Runs The Voodoo Down” and “Spanish Key” at Antibes were performed live in July, well before the historic August 1969 Bitches Brew sessions, where they were first recorded in the studio. Likewise, the versions of “Bitches Brew” from Stockholm and Berlin are heard here several months before the album was released on Columbia Records in April 1970. As with Live In Europe 1967, the interpretations of the compositions are not only strikingly different than the original studio versions by other configurations of Miles’ groups, but differ wildly even from night to night on these four shows, again demonstrating the extraordinarily high level of creativity among these musicians.

The box set also contains multiple examples of Wayne Shorter’s unparalleled composing skills, from “Footprints” (dating back to 1967’s Miles Smiles) to multiple performances of his gems, “Nefertiti” and “Masqualero.” On the extremely rare and mostly acoustic set from Stockholm, there is a bonus track version of “This,” a Chick Corea composition that was never officially recorded by Miles Davis. MILES DAVIS QUINTET – LIVE IN EUROPE 1969: THE BOOTLEG SERIES VOL. 2 is an indispensable link between the work of our most important and influential jazz musician at the end of the ’60s, and the road ahead to what the ’70s would bring.

As Jack DeJohnette told Woodard a few months ago, “Miles just keeps growing and growing and growing,” a surprising thing to say about any musician more than 20 years after his passing. But with MILES DAVIS QUINTET – LIVE IN EUROPE 1969: THE BOOTLEG SERIES VOL. 2, Legacy once again digs deep to reveal a little known period in the work of a giant, seen and heard performing with an amazing band, music that was unlike anything he recorded before or after.

“And so,” Woodard concludes, “these important ‘field recordings,’ from a mysterious past and unfolding future, take us to a place and a time between the cracks of the Miles Davis story as it is commonly understood. For that alone, never mind the rattling, exploratory poetry of this band’s sound, this is a significant cultural document for the ears and the ages, not just the archives.”

DVD – Selections:
1. Introduction by John O’Brien-Docker
2. Directions
3. Bitches Brew
4. It’s About That Time
5. I Fall In Love Too Easily
6. Sanctuary
7. The Theme
(Recorded 11/7/69 at Berliner Jazztage in the Berlin Philharmonie.)