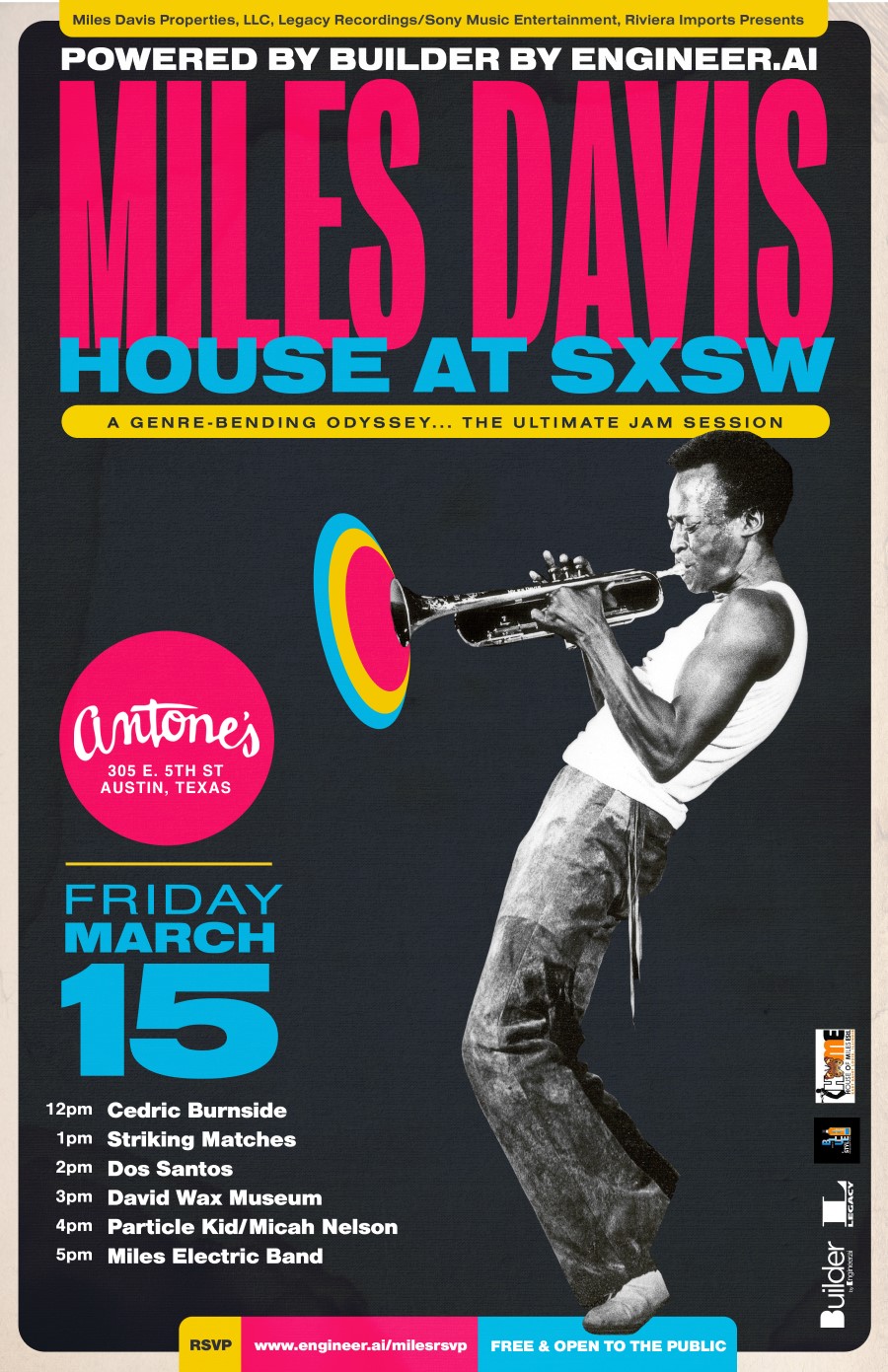 In The Spirit Of Miles, Celebration Promotes Music, Art and Cultural Progressiveness, Featuring A Stellar Line-up Of Multi-Genre Emerging Talent

POWERED BY BUILDER BY ENGINEER.AI

WHAT: Miles Davis House is an annual SXSW day party hosted by the Miles Davis family and featuring a wide cross section of multi-genre emerging talent, the next generation of musical disruptors. In the spirit of Miles, the celebration promotes music, art and cultural progressiveness. Kind Of Blue Scotch Whisky and specialty cocktails will be served. A new Miles Davis T-shirt will be available with original artwork by Francine Turk.

The event is powered by Builder by Engineer.ai. Additional sponsors include Miles Davis Estate, Legacy Recordings/Sony Music Entertainment and Riviera Imports. Music is curated by The Miles Davis Estate and Andrew Leib, with production by Antone’s.

Engineer.ai is teaming up with the Miles Davis Estate to power the guest management platform for the event through its Builder product. Engineer.ai empowers anyone with an idea — from e-commerce platforms to social apps — to build it without learning to code. Combining AI+human developers to create a software assembly line, Builder delivers custom software products quickly, simply and affordably. As a result, an entire #BuilderGeneration — from individual dreamers, to entrepreneurs, to enterprise-scale solutions for businesses— is emerging and realizing their dreams. A technology partner for life, Engineer develops, hosts, and maintains custom software for its customers.

Miles Davis, one of the most innovative and influential figures in music, epitomizes the #BuilderGeneration. Throughout his career, he constantly innovated, breaking down barriers and appealing to broader audiences across genres. As a result, he inspired entire generations of innovators, making Builder and the Miles Davis Estate a natural partnership. Engineer.ai works to inspire an entire #BuilderGeneration of dreamers, creative individuals and companies to build their technology ideas.

Miles Davis House supports HOME, a non-profit 501c3 on a mission to renovate the childhood home of Miles Davis.

“SXSW for many years has been a showcase for young talent and we wanted to be a part of it. We wanted to help bring new talent to light, in different genres together, just as Miles also introduced new talent in his band” – Miles Davis Estate

About Engineer.ai
Based in London and Los Angeles, Engineer.ai was created to empower anyone with an idea to build it without needing to code. Engineer.ai has already attracted hundreds of customers across the globe, from e-commerce and m-commerce platforms, to social apps, who have used the Builder platform to create products like BBC, DiditFor, Virgin, and Manscore. Engineer.ai combines AI+human developers to create a software assembly line that builds custom software products quickly, simply and affordably. A technology partner for life, Engineer develops, hosts, and maintains custom software for its customers. In 2018, the company secured a $29.5M Series A funding round, one of the largest in Europe. For more information on Engineer.ai and its Builder platform, please visit https://builder.engineer.ai.

COMMENTS: One of the most innovative figures in jazz history, trumpeter Miles Davis notched his mainstream breakthrough with 1970’s Bitches Brew, which reached No. 35 on the Billboard 200 and was certified platinum. His 1959 album, Kind Of Blue, ranks as the best-selling jazz album of all time and is on Rolling Stone’s 500 Greatest Albums. He’s won 8 GRAMMY Awards; a GRAMMY Lifetime Achievement Award, 11 of his recordings have been inducted into the GRAMMY Hall Of Fame.

“Miles Davis is Superman to us…literally. We wouldn’t be musicians if it wasn’t for him. He was the first rock star.” – Semi Precious Weapons

“Miles Davis’s name to me means ‘legendary.’ I think all R&B is inspired by Jazz and Blues. I think it’s the most passionate kind of music.” – Jhene Aiko

“​It would be hard to make up a character as cool, as stylish and as musical, and just a wicked mother fucker – as Miles Davis. And thank the universe or whatever it was that he really did exist. And he really made some insane fucking music.” — Wayne Coyne, Flaming Lips