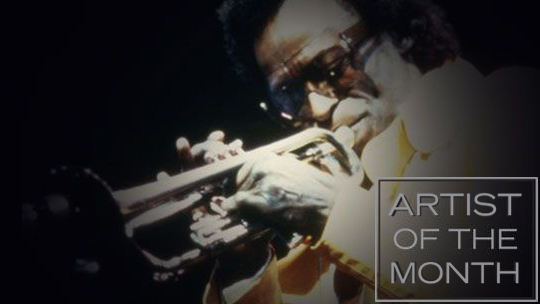 Columbia Records and Legacy Recordings, the catalog division of Sony Music Entertainment, celebrates the genius of Miles Davis, honoring the 20th century jazz avatar as the label’s Artist of the Month for May 2013.

On May 16, at 3pm, the New York City Landmarks Preservation Commission will honor Miles Davis at a Medallion Ceremony at 312 West 77th Street, the brownstone townhouse, purchased by Davis in 1958, that served as both home and working environment for the artist for 25 years.

Born Miles Dewey Davis III on May 26, 1926 in Alton, Illinois, Miles grew up in East St. Louis, first learning trumpet at age 13. Graduating high school, he moved to New York in 1944 to study at the Juilliard School of Music, developing chops in technique and music theory before leaving to become a full-time player on the New York jazz circuit, cutting his first records in 1945.

One of the most revolutionary and influential musicians and recording artists of the 20th century, Miles Davis was in the vanguard of virtually every phase of the evolution of post-WWII American jazz, from be-bop to cool jazz to hard-bop to modal jazz to the rock-jazz-funk-fusion that got him inducted into the Rock and Roll Hall of Fame in 2006. Miles Davis died on September 28, 1991, leaving an extensive catalog of unprecedented music that remains both timeless and groundbreaking.

Trumpeter, bandleader and composer, Miles Davis fronted some of the most formidable and adroit ensembles in jazz history. Miles was that rarest of artists: an uncompromising avant-garde visionary who achieved both critical and commercial success. In 2008, Davis’s 1959 masterpiece, Kind of Blue, was certified 4x platinum, solidifying its stature as the top-selling jazz album of all-time. In December 2009, the United States House of Representatives passed a resolution on Kind of Blue‘s 50th anniversary “honoring the masterpiece and reaffirming jazz as a national treasure.”

On the Legacy Recordings site, fans and collectors will find access to a variety of comprehensive Miles Davis titles including: Setlist: The Very Best of Miles Davis and Setlist: The Very Best of Miles Davis (Live) as well as Volumes 1 and 2 of the acclaimed Miles Davis Bootleg Series, a selection of rare and previously unreleased recordings to be drawn from all phases of Davis’s career, housed in deluxe CD + DVD boxes (with a “Best of” compilation available for The Bootleg Series, Vol. 1).

Live In Europe 1967 was 2011’s most acclaimed historic jazz box set, receiving a “5-star” review from Down Beat magazine and voted Historical Album of the Year in the Down Beat Readers and Critics Poll; it ranked as the #1 reissue in both the Critics and Readers polls of JazzTimes magazine, and the Jazz Journalists Association voted it Best Historical or Boxed Set. The package received an “A” from Entertainment Weekly, and Pitchfork.com said “At its heart, jazz thrives on bold, sensitive interaction in the moment, and Live In Europe 1967 represents the pinnacle of that practice.” Rave reviews appeared in a wide array of publications including the New York Times, Los Angeles Times, The Nation, Slate, and many others.

In his Sunday “Arts & Leisure” rave review of Live In Europe 1967, New York Times critic Nate Chinen concluded: “It’s humbling to think that a release like Live in Europe 1967 might help illuminate jazz’s present as well as its past, but that’s what great archival work can do. So congratulations, Columbia/Legacy. Now, what’s next?”

“The scope of these concerts is remarkable,” wrote Pitchfork in its (9 out of 10 rated) review of Live In Europe 1969: The Bootleg Series Vol. 2 , “(The Miles Davis Quintet) makes for a deadly team, equally at home with low-down groove, in-the-pocket swing and feverish abstraction.”

“It’s wild, fitful, ripping good stuff,” raved NPR’s All Things Considered while the New York Daily News noted that “This set snaps Miles with a quintet that danced brilliantly between the relative formality of the mid ’60s and the great madness to come.”

“(Miles) plays with power, range and passion, goading the rhythm section into epic battles,” observed BBC Music while The Guardian gave it 4 stars marveling that “…this is newly emerging and influential music still in the furnace and Davis’ timing can make even a season fan whoop.”

Seasoned and future fans of Miles Davis are invited to check out the man and his music as Legacy Recording’s May Artist of the Month.