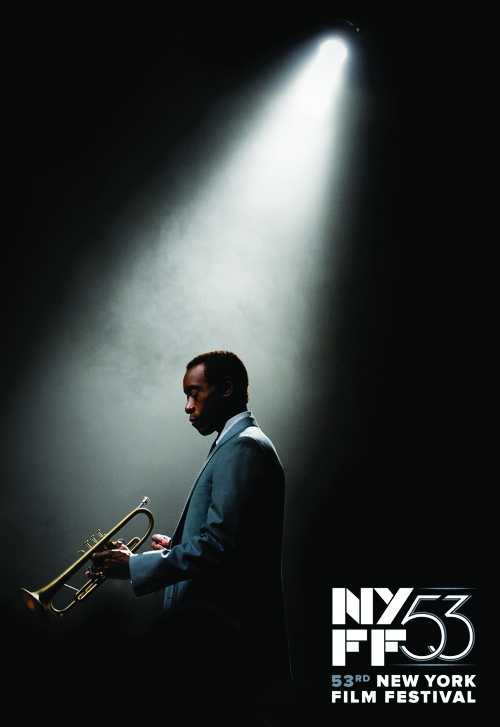 The Film Society of Lincoln Center is pleased to announce the World Premiere of Don Cheadle’s directorial debut, Miles Ahead, as the Closing Night selection for the 53rd New York Film Festival. In the film, Cheadle, who also co-wrote the script, stars as the legendary Miles Davis opposite Emayatzy Corinealdi and Ewan McGregor. This announcement marks the second World Premiere film slated for this year’s NYFF, running September 25 – October 11, along with Robert Zemeckis’ The Walk, set for Opening Night.

New York Film Festival Director and Selection Committee Chair Kent Jones said: “I admire Don’s film because of all the intelligent decisions he’s made about how to deal with Miles, but I was moved—deeply moved—by Miles Ahead for other reasons. Don knows, as an actor, a writer, a director, and a lover of Miles’ music, that intelligent decisions and well-planned strategies only get you so far, that finally it’s your own commitment and attention to every moment and every detail that brings a movie to life. ‘There is no longer much else but ourselves, in the place given us,’ wrote the poet Robert Creeley. ‘To make that present, and actual … is not an embarrassment, but love.’ That’s the core of art. Miles Davis knew it, and Don Cheadle knows it.”

Don Cheadle added: “I am happy that the selection committee saw fit to invite us to the dance. It’s very gratifying that all the hard work that went into the making of this film, from every person on the team, has brought us here. Miles’ music is all-encompassing, forward-leaning, and expansive. He changed the game time after time, and New York is really where it all took off for him. Alice Tully Hall, Lincoln Center… feels very ‘right place, right time.’ Very exciting.”

Miles Davis was one of the greatest artists of the 20th century. And how do you make a movie about him? You get to know the man inside and out and then you reveal him in full, which is exactly what Don Cheadle does as a director, a writer, and an actor with this remarkable portrait of Davis, refracted through his crazy days in the late-70s. Holed up in his Manhattan apartment, wracked with pain from a variety of ailments and fiending for the next check from his record company, dodging sycophants and industry executives, he is haunted by memories of old glories and humiliations and of his years with his great love Frances Taylor (Emayatzy Corinealdi). Every second of Cheadle’s cinematic mosaic is passionately engaged with its subject: this is, truly, one of the finest films ever made about the life of an artist. With Ewan McGregor as Dave Brill, the “reporter” who cons his way into Miles’ apartment. The film was produced by Don Cheadle, Pamela Hirsch, Lenore Zerman. Along with Daniel Wagner, Robert Barnum, Vince Willburn and Daryl Porter.

Read more at the The Film Society of Lincoln Center.