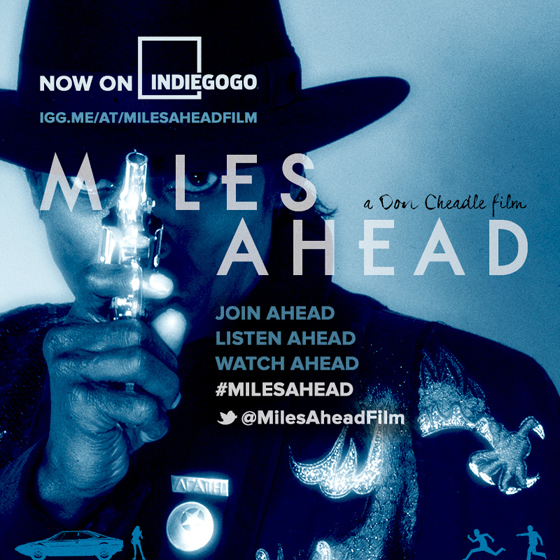 Cheadle will make his directorial debut with a film about the legendary musician with cast that includes Ewan McGregor.

LOS ANGELES, CA, June 4, 2014 – Don Cheadle, Academy-Award™nominated actor and star of such films as HOTEL RWANDA, OCEAN’S ELEVEN, as well as the Showtime series “House of Lies,” launched a crowdfunding campaign today on Indiegogo, the world’s largest global crowdfunding platform. Cheadle is seeking additional production funds on his feature film directorial debut, MILES AHEAD. The film tells the story of a few dangerous days in the life of music icon Miles Davis (played by Cheadle), the virtuoso, fighter and genius, as he bursts out of his silent period and conspires with a Rolling Stone writer to steal back his music. Ewan McGregor (AUGUST: OSAGE COUNTY) has also been cast to co-star.

“We are eager to get the word out about our film and to build a community of people who are just as excited as we are about a Miles Davis movie,” said Cheadle. “While Miles used his horn to communicate and create “social music” we are using social media and today’s online platforms to reach out to the music community, the film community and all people who are excited to see an explosive, cool music-filled movie.

MILES AHEAD is seeking to raise $325,000 on Indiegogo by July 6 to support the principal photography for the feature length film when it goes into production later this summer. Among the pledge prizes for MILES AHEAD are rare MILES posters, limited edition Miles Davis artwork, a coffee table book of Miles’ artwork signed by Don Cheadle, as well as set visits and access to screenings.

As to why he decided to utilize the Indiegogo platform Cheadle continued, “Most studios don’t make these kinds of movies anymore, so we are doing it independently. I’m personally putting a big chunk of money into our budget as well as putting all my fees back in. But the extra money we hope to raise on Indiegogo will help us recreate the multiple time periods we’re dealing with and with the logistics of incorporating all the music. We are excited to get people talking about the movie early, raise awareness, and set into motion the groundswell of support we hope will continue through to the film’s release.”

“Erin, Cheryl and I, and Miles Davis Properties, LLC are extremely excited to have Don Cheadle play Sir Miles Dewey Davis in the forthcoming movie,” said Miles Davis’ nephew Vince Wilburn, speaking on behalf of his family. “Don’s vision and his unwavering passion will undoubtedly serve this project to the highest standard and we are beyond thrilled to have him onboard.”

Cheadle is best known for roles in CRASH, Steven Soderbergh’s OCEAN’S ELEVEN films, IRON MAN 2 & 3, as well as for his Academy Award-nominated performance as Best Actor in 2004’s HOTEL RWANDA. He can currently be seen starring in Showtime’s HOUSE OF LIES as Marty Kaan, for which he won a Golden Globe in 2013.

Cheadle is producing the film through his Crescendo Productions banner, along with Bifrost’s Daniel Wagner, and Robert Ogden Barnum. Also producing are Darryl Porter and Vince Wilburn on behalf of the Davis estate, Lenore Zerman and Pam Hirsch.

About Indiegogo
Indiegogo empowers people around the world to fund what matters to them. As the largest global crowdfunding platform, campaigns have launched from almost every country around the world with millions of dollars being distributed every week due to contributions made by the Indiegogo community. At its core, Indiegogo is an open platform dedicated to democratizing the way people raise funds for any project–creative, entrepreneurial or cause-related. The company was launched in 2008 and is headquartered in San Francisco, with offices in Los Angeles and New York. For more information, visit www.indiegogo.com and follow us at www.twitter.com/indiegogo and www.facebook.com/indiegogo.