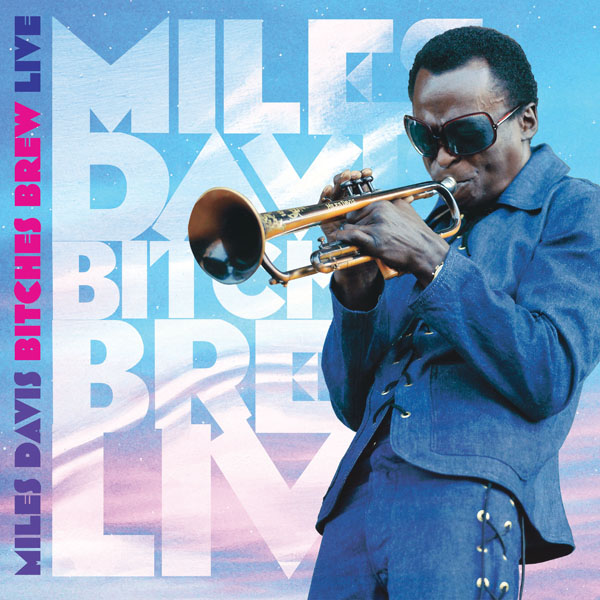 Four decades later, it remains the great game changer, the genre-bending, barrier-smashing double LP that would become Miles Davis’ first RIAA gold album, and influence two – three! (so far) – generations of jazz and rock musicians to come. Released in April of 1970, Bitches Brew refracted the chaos and beauty of a society stretched (and stressed) to its breaking point, the penultimate creation of Miles’ career.

BITCHES BREW LIVE adds yet another dimension to the album’s prismatic reputation. Its nine rare live performances comprise repertoire from the studio album and the one that preceded it, 1969’s In A Silent Way. The live tracks were recorded at festivals nine months before Bitches Brew’s release (Newport Jazz, July 1969, the first three tracks, previously unissued) and four months after (Isle Of Wight, August 1970, the final six tracks). This fascinating 59-minute glimpse into ‘the evolution of the groove’ will be available at all physical and digital retail outlets starting February 8, 2011.

“When I hired Miles [for the 1969 festival],” recalls Newport founder and impresario George Wein in 2010, “I thought it would be with Wayne Shorter and Herbie and Ron and Tony.” Wein refers to Miles’ so-called ‘second great quintet’ (of Wayne Shorter on tenor saxophone, Herbie Hancock on piano, bassist Ron Carter, and drummer Tony Williams).

Wein’s interview, conducted by award-winning rock journalist and musician Michael Azerrad, will feature prominently in Azerrad’s liner notes essay for BITCHES BREW LIVE. Also interviewed for the notes is filmmaker Murray Lerner, whose film coverage of the Newport and Isle of Wight festivals in the 1960s through 1970 is an essential source of documentation for the events. Michael Azerrad, a working musician based in New York, and a former contrib­uting editor at Rolling Stone, is the author of several definitive rock books, including Come as You Are: The Story of Nirvana (Doubleday, 1993) and Our Band Could Be Your Life (Little, Brown, 2001).

Transcripts of both Wein’s and Lerner’s full interviews will be posted online on this web site starting late December as part of the campaign leading up to the release of BITCHES BREW LIVE.

Such was the clandestine level of Miles’ activities at the time, that even Wein did not know the ‘second great quintet’ had been dissolved after the In A Silent Way sessions of February 1969 – except for Shorter, though, ironically, he did not make the Newport date as he was stuck in traffic. Joining Miles was the core of the rhythm section that was introduced (in part) on In A Silent Way, and played through most of the Bitches Brew studio sessions: Chick Corea (electric piano), Dave Holland (acoustic bass), and Jack DeJohnette (drums).

“This particular year in ’69,” Wein remembers, “I had a lot of rock groups. I had Led Zeppelin, I had the Mothers of Invention, I had Jeff Beck, I had Jethro Tull, Ten Years After. I had Sly and the Family Stone and The World’s Greatest Jazz Band on the same show – a little ridiculous but it worked. We had more people than we ever saw in our lives because we turned the Newport Jazz Festival into a rock festival. And a lot of the rock artists were not happy about that. See, a lot of the rock artists in those days were real jazz fans and blues fans. Jimmy Page and Ian Anderson, they were jazz fans, and they wanted to be part of the jazz festival. Several of them said, eh, it’s just another rock festival. But Miles, who never stayed, from the first day to the last, he stayed right on my shoulder.”

As explained in the introductory note by reissue producers Richard Seidel and Michael Cuscuna (who also produced Bitches Brew: 40th Anniversary Collector’s Edition, “The previously unreleased Newport set contains the first ever professionally recorded live version of ‘Miles Runs The Voodoo Down’ (there are low-fi audience recordings of the tune from clubs in New York during May and June of 1969) and the first known recording of the revamped electric version of ‘Sanctuary,’ some six weeks before Miles went into the studio to record both pieces for the Bitches Brew album.”

The same band, it is noted (with added musicians Keith Jarrett, Airto Moreira and Gary Bartz), can be heard on CD Three of Bitches Brew: 40th Anniversary Collector’s Edition, at the Berkshire Music Center’s Tanglewood Festival, 11 days before Isle Of Wight [1970] playing a very similar set: “Directions,” “Bitches Brew,” “The Mask,” “It’s About That Time,” “Sanctuary,” “Spanish Key/The Theme,” “Miles Runs The Voodoo Down.” The set was previously unreleased prior to its debut on the 40th box set.

“Directions” and “It’s About That Time” date from the In A Silent Way sessions. Those sessions were the last major studio dates for Miles prior to the Bitches Brew sessions of August 19-20-21, 1969 – the Tuesday, Wednesday and Thursday after the Woodstock Music & Art Fair sent its own seismic shockwaves around the world.

“Miles Davis was a beautiful human being,” muses Wein, who first began booking him around New England in the 1950s. “He had a charisma about him that a lot of people love to write about. People grew up making love to Miles Davis’ music. They were playing his records while they were in bed with their mistress or their lady or whatever. That’s legend. He was the only one, the bebop era, that came out of it playing the melody that people could understand. When he played ‘On the Street Where You Live’ or ‘Bye, Bye Blackbird’ and then Kind of Blue, it was all simple, sweet music — but with a modern tinge. And that’s where the legend grew.”