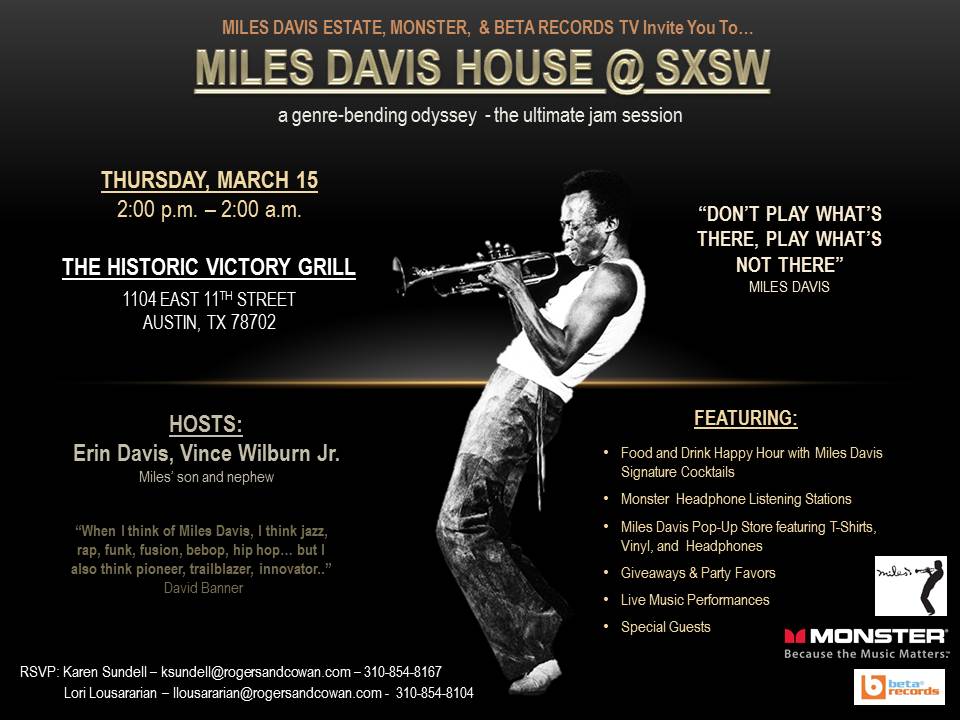 (Los Angeles, CA) – The Miles Davis Estate, Monster,® a world leader in high-performance headphones, and Beta Records TV will roll-out the inaugural Miles Davis House at SXSW on Thursday, March 15 from 1:30 p.m. – 2 a.m. at the historic Victory Grill, an Austin landmark widely regarded for its rich jazz and blues legacy. The event will be hosted by Erin Davis (son of Miles) and Vince Wilburn, Jr. (nephew of Miles), who in the spirit of SXSW, have curated a stellar, multi-genre, cross-section of top emerging acts to perform, in addition to extending an open invitation to the SXSW music community to join the end-of-the-evening Jam Session from 12 midnight – 2 a.m. Additionally, Miles Davis House will feature a food and drink Happy Hour from 4 p.m. – 6 p.m.; a Pop-Up store selling t-shirts, vinyl and EPs; Monster Headphone Listening Stations to check out the new Miles Davis Trumpet High Performance In-Ear Headphones, and Evolution Of The Groove giveaways to the first 150 guests. Beta Records TV is the official production arm of Miles Davis House and will shoot the live music performances and cover the event in its entirety for later broadcast.

Comments Miles Davis Estate: “We love Austin and hitting SXSW; It’s completely in-sync with the philosophy of Miles. It’s all about the music, and pushing the music forward. SXSW and Miles share similar ground in being ahead-of-the-curve, and not after–the-fact. We’re excited to roll-out the inaugural Miles Davis House with our partners Monster and Beta Records TV.”

Head Monster, Noel Lee, creator of the acclaimed Beats™ by Dr. Dre™ headphone sound, noted: “We at Monster are very proud to have worked with the Miles Davis Estate to create our Miles Davis Trumpet headphones. We designed these headphones to capture the essence of Miles and his music, and give all music lovers an opportunity to experience the deep emotional connection made possible when you bring together great music with truly exceptional audio. We are also delighted to have the chance to share our passion for music and sound at this great Miles Davis House launch event, and of course, to share in all the great music inspired by the artistry of Miles Davis!”

Chris Honetschlaeger, President of Beta Records TV comments: “Miles Davis and Monster are certainly two of the greatest names in Music. BETA is excited to bring its video production and promotion to this inaugural event. The `Ultimate Jam Session’ starting at Midnight will be an incredible way to experience music in the spirit of Miles’ genius.”

MILES DAVIS HOUSE at SXSW is an Open Party with RSVP required to [email protected] Should the venue reach capacity, it will be first come, first served, until space frees up. Following is the musical line-up:

ABOUT MONSTER®
Monster is the world’s leading manufacturer of premium headphones and advanced connectivity solutions for high-performance home entertainment, audio, home theater, mobile, computer and gaming, as well as a leading innovator in the field of iPod®, iPhone® and iPad® accessories and professional audio. The company was founded by Head Monster Noel Lee more than 30 years ago with a commitment to creating products that literally “make music sound better” and it has continued to expand and diversify ever since. Under its Monster Cable® brand, the company leads the way in advanced audio, video, and data connectivity solutions, and under the Monster Power® brand, it provides high-performance AC power line conditioning and protection products for audio/video systems. Monster continues to lead in innovation with over 350 U.S. and international patents and 100 pending, offering more than 6,000 products in over 120 countries worldwide. Explore the world of Monster at www.monsterproducts.com.