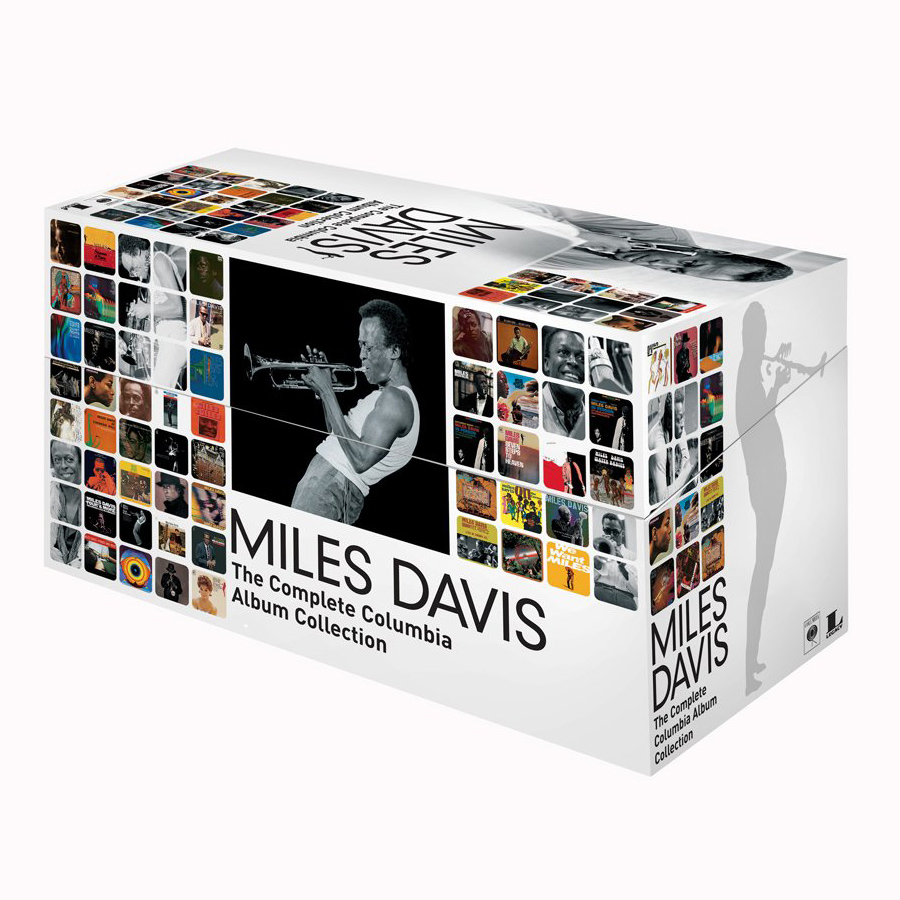 In all the annals of modern jazz, there is no other phenomenon that compares to the 30-year association of Miles Davis and Columbia Records, from 1955 to 1985. Both in the scope of Miles’ prolific output during the entire history of the 12-inch LP era, more than 50 distinct album titles in the U.S., Europe and Japan, as well as the primal influence that Miles – and his evolving group lineups – had on the course of jazz, there is simply no precedent. Miles at Columbia stands alone.

Along with the discs comes a generous 250-page book whose centerpiece is an 11,000-word biographical essay by Frédéric Goaty, the most in-depth liner notes ever included in any Miles Davis package. Goaty is the director of the French Jazz Magazine and the co-author of the 1995 book Miles Davis. The essay is complemented by brief annotations (about 200 words each) written by Franck Bergerot, covering every single one of the 52 albums and the DVD. Bergerot is the Chief Editor of Jazz Magazine and the author of Miles Davis: Introduction à l’écoute du jazz moderne. Rare photography, full discographic production notes, and a complete track index are also included.

The cornerstones of the Miles Davis Columbia box set are the studio and live albums that were released during his tenure at the label, more than 40 titles that he recorded in the 1950s, ’60s, ’70s and ’80s. The vast majority of these were released around the time of their recording or soon after; others appeared as historic discoveries years later. Since the critically acclaimed and multiple GRAMMY Award-winning Miles Davis Series was launched in 1996, the majority of all these albums have been reissued by Columbia/Legacy as expanded editions with bonus material. The expanded editions will be the ones utilized on this new box set. Since the original LP jacket artwork will be replicated, the bonus tracks will only appear as indexed in the book’s discographical section.

A third grouping of albums receive special attention on the new box set and are summarized as follows:

In Paris Festival International De Jazz May, 1949 (1949): Miles’ first trip to Europe was a resounding critical and commercial success, but upon his return to the U.S., he went through a long purgatory before recovering that acclaim in the ’50s. In 1977 (in the midst of Miles’ 1975-80 hiatus from touring and recording), Henri Renaud, head of the CBS France Jazz Department, collaborated with Bruce Lundvall, then president of Columbia Records U.S., on the release of the 1949 concert at Salle Pleyel. It was actually billed on the LP as the Miles Davis-Tadd Dameron Quintet (with James Moody on tenor sax, drummer Kenny Clarke, and bassist Barney Spieler). This new CD adds two previously unreleased tracks: pianist-composer Dameron’s “The Squirrel” and the classic ballad “Lover Man.”

Quiet Nights (1962): In the summer 1962, at the dawn of the bossa nova craze, Miles experimented on some tracks with arranger Gil Evans, whose interest in South American music went back many years. In order to complete the Quiet Nights project, producer Teo Macero pulled a track from the West Coast sessions that yielded Seven Steps To Heaven. That same summer, Wayne Shorter made his first recordings with Miles and Evans, two years before Shorter joined Miles’ quintet. One track was a bleak Christmas song called “Blue Xmas / To Whom It May Concern” (introduced on 1962’s Jingle Bell Jazz). Another track was “Devil May Care” which features one of Miles’ greatest recorded solos. Both are true rarities which only appeared together before on 1996’s three-time Grammy Award-winning 6-CD box set, Miles Davis & Gil Evans: The Complete Columbia Studio Recordings.

At Plugged Nickel (1965): Sony Music in Japan caused a sensation in 1976, when they released two LPs worth of highly-edited music from the December 22-23, 1965 appearance at this Chicago club by the Shorter-Hancock-Carter-Williams quintet. Columbia received similar raves when they eventually released the double-LP in the U.S. in 1982. Thirteen years later, the entire unedited program of performances from the Plugged Nickel was issued by Columbia/Legacy as an 8-CD box set (long out-of-print). This new double-CD version for MILES DAVIS COLUMBIA is the best of both worlds – retrieving the original track sequence of the classic LPs, but in their full unedited versions as heard in the 1995 box set.

Isle Of Wight (1970): The chaos of the third annual Isle Of Wight Festival is well-documented, as dissidents burned down and trampled as much of the place as they could on the final night, leading the powers-that-be to ban the gathering for more than three decades. Miles’ set on the fourth (and next-to-last) night was no less revolutionary on the bill he shared with Joni Mitchell, Ten Years After, Emerson Lake & Palmer, the Doors, the Who, and Sly and the Family Stone, among others. Here is the same general 1970 rhythm section (Chick Corea, Dave Holland, Jack DeJohnette, and Airto Moreira) that Miles used on his 1970 double-LPs Black Beauty: Miles Davis At Fillmore West and At Fillmore. The Isle Of Wight additions are Keith Jarrett (who also played on At Fillmore) and Gary Bartz replacing Steve Grossman on sax. This box marks the first official release of the full-length Isle of Wight 1970 concert on any album (CD).

We Want Miles (1981): At the end of Miles’ five-year 1975-80 hiatus, he came back with a vengeance, releasing The Man With The Horn in ’81 and hitting the road with most of that album’s players: Bill Evans (saxophones), Mike Stern (guitar), Marcus Miller (bass), and Al Foster (drums), adding Mino Cinelu on percussion. Columbia recorded them live in Boston, New York and Tokyo, and numbers from all three cities comprised the original double-LP We Want Miles. CBS/Sony Japan followed up with additional performances from Tokyo on Miles!, Miles!, Miles!, whose impossibly rare LP and subsequent CD are both out-of-print. Three of those tracks, “Ursula”, “Aida” and “Fat Time,” transform We Want Miles into the newest expanded edition for the release of The Complete Miles Davis Columbia Album Collection. 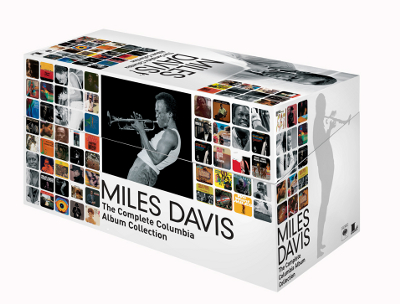